Right, it seems that there is considerable interest in my boxes so this summer I shall make a load more. Big ones, little ones, boxes inside boxes, broken boxes, coloured boxes. You name it, if it looks like a box I shall try it. So the paper is on the table, the clay is in the bucket, I cannot think why I have not yet begun. See you later . . . . . . . . . . . .

It seems to have taken me a while to come up for air at the end of term but, at last I have time to focus on how my work has progressed this year, during the diploma.  I can honestly say that I have never had so much fun or been so satisfied with my efforts as I have been during some of the projects this year.  The wall assemblage project felt like a highlight at the time but since then have come other excitements, such as discovering what happens when you use very expensive magazines as the basis for porcelain slip.  I do not think I had expected anything quite so extraordinary to happen and I am not sure that my tutors did either!  There is a lot of work to do on this process before I have made anything which does not practically explode when you approach it because of it’s fragility but I have every intention of pursuing this way of working and see how far I can push things.  On top of that, I find that I can throw!  It is a bit like riding a bike – the more you think about balance, the more likely you are to fall off.  Once I stopped caring about the result, the clay seemed to do its own thing and suddenly I was left with something resembling a pot!  experimenting with glazes has been another highlight of the year, the most exciting being my spodumene glaze which reminds me of a crust of salt crystals drying in the sun.  So what happens next?  I can hardly wait for the term to begin but before that I have some commissions to work on, some glazes to plan and a project, set by college and right up my street, entitled A Journey.  No where will that take me, I wonder! 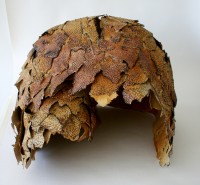