For quite some time I have had a desire to ‘go large’ in the studio so when I saw a really enormous beach ball for sale in the village post office I simply couldn’t resist the temptation to make a really bit mould.  When I got it home, I discovered just how large it really was – maybe I need a bigger kiln!

Houston, we have a problem!

In fact it isn’t TOO big.  Once I have done some manipulation of the clay and there has been a bit of shrinkage I am confident that my current kiln will be just fine.

The next thing to do was to create the mould from the shape.  As a general rule I would have built up the clay all the way to the mid point of the ball, constructed a wall around the entire thing and started pouring plaster of Paris until the cows came home.  If I had done that this time I would have used a ton of plaster of Paris and ended up with something so big and heavy I would never have been able to lift it so I thought I would go for something different.  The following images show the main stages:

1. Make a clay barrier exactly on the mid line of the ball. 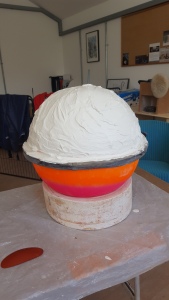 2. pour a very thin layer of plaster of Paris over the whole of the top of the ball. (I made the plaster thicker than usual so that it didn’t run off.

3. Put a collar on the outside of the clay wall and pour more plaster over tha ball, making sure that it filled the collar and was a fairly even thickness all over.

The result is that I now have a fabulously large mould.  It is light and easy to manoeuvre and I can’t wait for it to dry out fully so that I can get making.

One thought on “Would you Like Chips with That?”