I should not be starting again at this stage but sometimes you cannot help yourself!

This morning, over breakfast, I asked my husband what it felt like to him when an idea strikes.  He looked at me with the gentle compassion which demonstrated clearly that he did not have a clue what I was talking about.  I wonder if I am alone in feeling almost euphoric when an idea comes.  I remember so vividly the exact moment at which I realised that I had to pursue some kind of exploration into art.  I was sitting in the art studio at the school where I was head of science.  The head of English had organised an artistic workshop for staff during the holidays and a handful of us were sitting round talking, relaxing and making sculpture.  It was a wonderfully convivial atmosphere and I know I was feeling completely happy and then ‘BANG’!  This huge surge of electricity

flooded my brain.  I couldn’t talk.  I could hardly think. It was an ecstatic moment with an after burn which lasted for several hours and I knew that life would never be the same again.  I know that sounds a bit melodramatic but those who know me well have come to recognise these moments when my head almost explodes with an idea and I am unable to focus on anything else for several hours – sometimes even days – while the adrenalin, or what ever it is that pumps though my system in that moment, is gradually dissipated.  I think it probably infuriates them but what can I do?

My mother describes moments when her brother seemed to have ‘gone to the pictures’ and my daughter has always ‘gone off on one’ with an idea for a story almost from the day she was born.  Perhaps it is a family thing.  Do they feel the surge of hormones and the associated heavy headedness that I experience?  Is this what is meant by artistic temperament?

My most recent moment was yesterday.  I was driving to my studio with the express intent of putting 5 pieces of work, which sat ready and waiting  to be fired, into the kiln – a half hour job at the most.  Then, just as I approached the traffic lights in Earlsfield and should have been concentrating on a difficult right turn, an electric

shock thudded through my brain.  I know that my resolution to the current project was not perfect but I had reached the stage of thinking that I was fairly pleased with it and it was good enough.  Now there was nothing else for it, I had no choice.  On arrival at the studios I rang home and explained that I might be some time.  I broke up the vessels which had waited so patiently for attention since before Christmas and began almost from scratch.  Assessment for these pieces is in less than a fortnight.  I have an exhibition (ArtRooms 2015: http://www.art-rooms.org/) going on at the same time as the assessment .  I should not be starting again at this stage.  But there was simply no alternative.

The interesting thing is that I should have known it was going to happen.  I had woken up feeling very restless.  By the time I got into the car I was actually shaking.  I should have known.  But that feeling, when the crescendo comes and the idea hits cannot be rushed and I am not at all sure whether watching it approach would actually do me any favours.  It is exhausting though.  Just sometimes I wonder what it would be like to have someone else’s brain inhabit my body for a week or so.  Would it be like having a holiday on a tropical beach?

One day I think I need to ask someone to wire me up so that I can actually watch my brain activity, such as it is, on a screen.  I cannot believe that it fits any pattern of normality but I can’t help thinking it might be rather spectacularly colourful.  If I can only capture the moment. 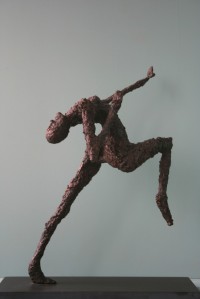 4 thoughts on “That Electric Lightbulb Moment”