College recently asked us to answer the following four questions and so I decided to share my responses with you in an effort to clarify my own thoughts.  Here goes . . . . . . .

Jung saw a drive in all of us to become ‘the person we are born to be’; to achieve Individuation.  In my constantly shifting lifestyle I have often felt quite a loss of identity.  The starting point for my work is something profoundly Cornish in me. I am using it to express my desire to belong whilst also reflecting my fascination with contrast.   I want to work with the materials, incorporating their behaviours and characteristics into my work rather than imposing my control over them.  But, more than anything else, I want to incorporate an element of luck and chance into my work.  My work is based more in emotion and intuition than in logic and function and I think that I am drawn to certain sorts of art because of a rather romantic desire to escape from convention.  I can relate to ideas about giving strength to individuals, about their place in nature and opposition to oppressive social convention.   I find renewal in nature and in the wild places. I have a love of the fundamentals of life; the relationships which we build with each other and with our home and the fragility and vulnerability of those relationships.  At the same time I am not afraid to break the rules and try new ways of doing things.  Now I have discovered the delicious unpredictability of adding found materials to my work I suspect that there will be no going back. 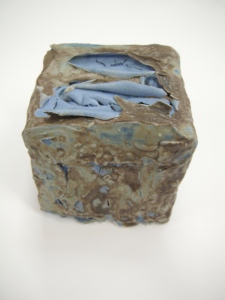 My work is non functional, ceramic, abstract art.  Often it seems to be more about process than about the finished piece.  I am excited by the work of Adam Buick, who makes moon jars using locally dug clay and finds which convey a sense of place.  He draws paths as a motif on his pots which he uses to represent his actual and metaphoric journeys through a place.  He considers that the understanding of a landscape arises from moving through it, providing context with paths, like common routes of experience, guiding us through it.  I also find inspiration in the work of experimental abstract artists such as Gillian Lowndes, a ceramicist, and Richard Long, a land artist.

That is a very good question!  I have already exhibited at exhibitions and have succeeded in selling through galleries and also at the Open Studios in Wimbledon, but where would I really like to see it sold?  I have a suspicion that it needs to find its way into a contemporary gallery before I start to be successful but that seems like a distant dream at the moment.  I would love to show at Ceramic Art London and at the Contemporary Ceramics Centre.  I do not envisage selling at craft fairs where the buyers are looking for useful things like mugs and bowls which I do not really have any interest in making.  Having said that, I can envisage a time when my work might return to some level of functionality but never on a scale of mass production.

Last year at the Wimbledon Artists Open Studios I was told that I should triple my prices.  At that show I was charging a maximum of £200 for what I considered to be my most interesting work.  How did I come to that figure?  Well it certainly wasn’t about the cost of materials.  My work was more newspaper than clay and had only been through a single firing. Nor was it related to the time it had taken to make, which amounted to many hours of careful, laborious and at times rather dull effort.  So what was it that I was selling?  I suppose it was the execution of the idea, and possibly also the metaphor with which I had imbued the piece.  What ever it was, not only did I sell that, most expensive piece but I sold a good deal more besides.  This year, having followed the afore mentioned advice I charged in excess of £600 for some pieces and sold virtually nothing.  Now there could be any number of reasons for this change in my fortunes; the right people did not happen to come along; my work has changed and is no longer so appealing; I was tired from all the recent effort and did not shine, hence neither did my work.  But I cannot ignore the possibility that this time people decided that my work was over priced!  So how on earth do you decide?

A number of weeks ago I took part in my first ‘proper’ exhibition.  ArtRooms at the Melia White House Hotel near Great Portman Street in London, see link .  It was a very interesting experience to unpick it afterwards.  The weekend was hugely flattering to my ego but it left both my wallet and my feet in a state of exhaustion.  I spent the entire weekend in a hotel corridor talking to people about my work, I made it to a number of reviews by name and lots of people said very nice things.  I didn’t sell a single thing though and it cost me a fair amount to be there.  I didn’t mind because I saw it as oxygen and hoped it might lead on to other more exciting prospects.  And it has!  This week I have been approached by two curators inviting me to take part in forthcoming exhibitions.  Wow!  What’s not to like?

The thing is though, how do you know?  Obviously I cannot afford to keep going to exhibitions simply to massage my ego.  Financially that does not put bread on the table – it doesn’t even put clay in the kiln!  These exhibitions would make me an international artist – one is in Turin, the other in Tokyo!!  But I cannot afford to go to either, and anyway, how on earth can you tell whether an exhibition is going to be the right setting for your work. I think this is one of the hardest things that I have to face as I approach the end of my diploma.  I sort of know where my art is going creatively but I have very little idea of where and how to put it ‘out there’.

On a simpler note, I can happily report that a couple of days of mud-larking in Falmouth during the lowest tides of the year has given me a fabulous selection of artefacts, some of which are already finding their way into or onto some of my ceramics for the final semester.

All this is a lot of fun!  It gives me permission to spend time clambering around on the shores of Cornish estuaries and feeling mildly insane – something which I find quite energizing.  Back in college the results are showing some promise although they are so think that nothing has dried enough to fire yet so I am not confident of success.  Oh, and I seem to have blotted my copybook at college by having such a good time – I got kept late on Friday because I had not done enough work!!!  Now I just need to work out melting temperatures, shrinkage rates, joining techniques and finishing methods and I will have a piece that someone might pay me to transport to Tokyo!